The most beautiful coffee house of the world in Budapest: New York

Which is the most beautiful cafe of the world? It is evident to the people of Budapest, that for sure it is New York Cafe on Erzsébet circuit, the one who also hold this title a hundred years back. But just like anything trivial, we handle this question with suspicion too. Is this a trumped-up title or do the well travelled beckon to it as well? 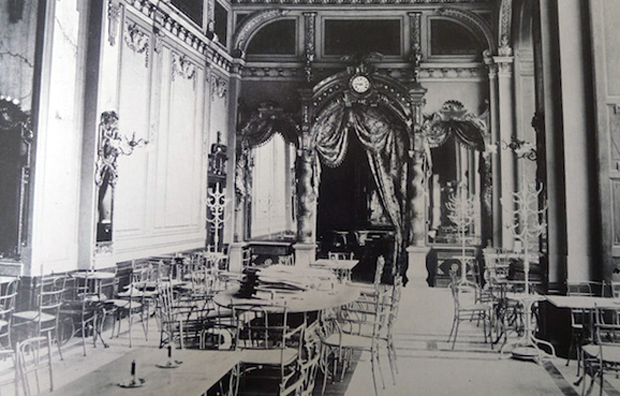 I give you the answer quickly: the lead is recognised far and near. Recently we posted the results of Ucityguides.com that counted Budapest into the most beautiful cities of the world. This tourist guide-lining site has a different list of the most beautiful cafes of our planet. And New York came first. 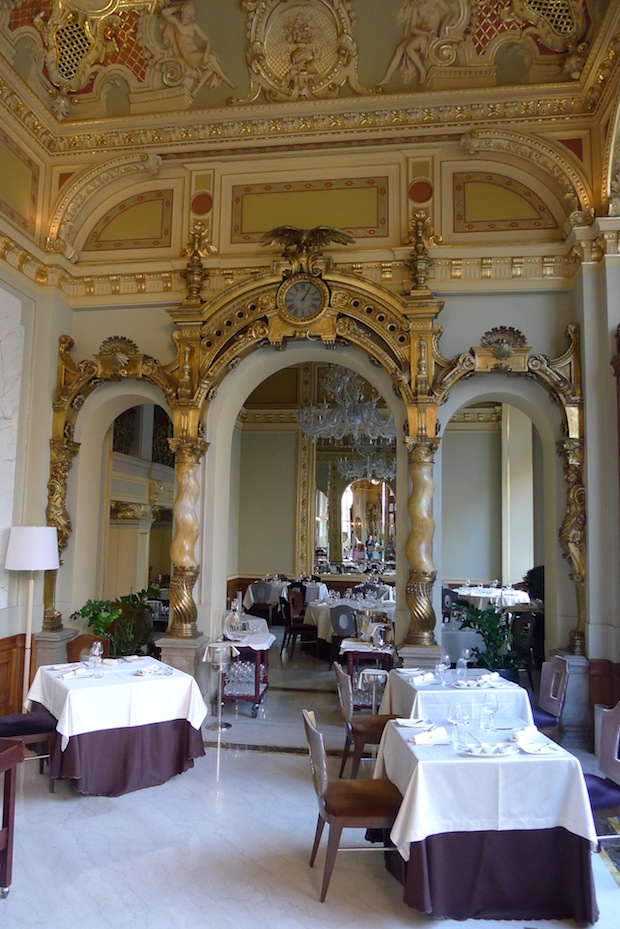 There is no doubt, you can feel that New York on the Boulevard is still in the leading position of all coffee houses ever since it was built in 1894, puffing it's glorious turn of the century image on us. 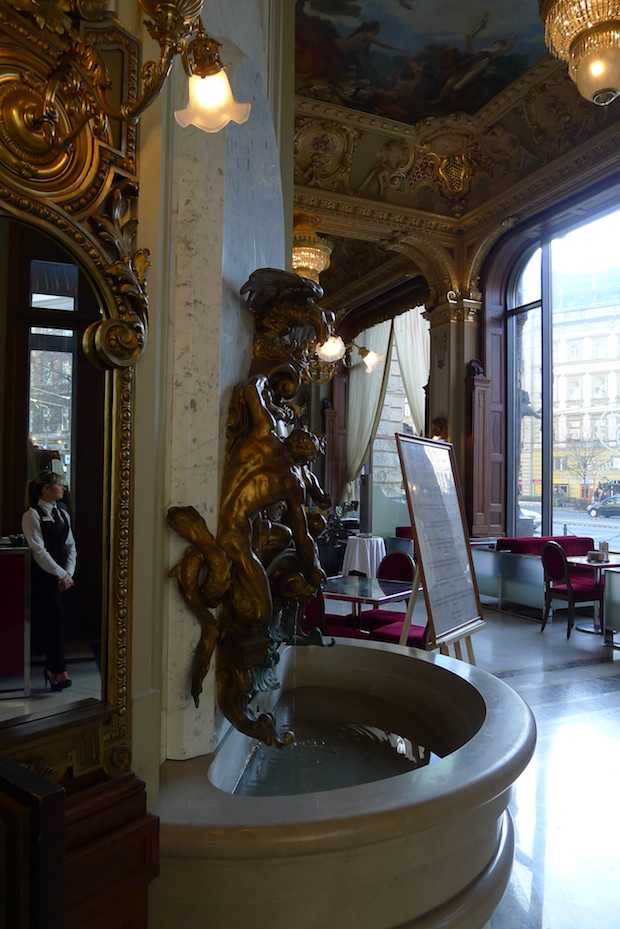 It was opened 117 years ago with huge ceremony. You can fit a lot into 117 years among others the two world wars, so no wonder New York Cafe is an ever changing place. When thinking about the building itself, we like to think back to the beginning of the 20th century as it had it's greatest magnificence those days, however we love it just as much these days, as the renovation had almost entirely set the original state back. 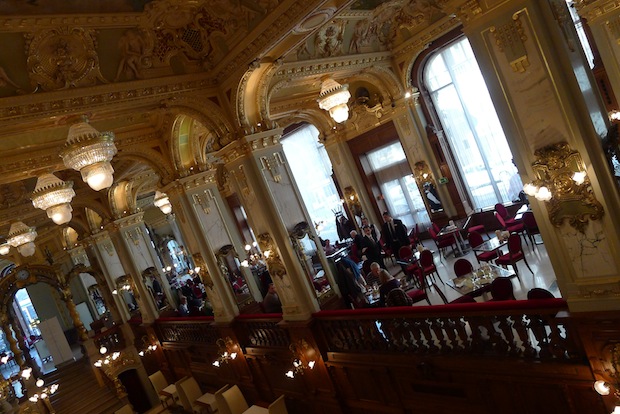 After it's original opening it became headquarters to many of the great literature, there were constant rented tables for poets, writers, journalists who could drink there on credit. Cafes had their greatest shine at that age. Youngsters were taken to the battle in world war I and military suppliers started to infiltrate into the premises. The humour of locals changed the old slogan of the place: 'After theatre let's meet at New York!' to: 'After the war let's meet at New York!'. 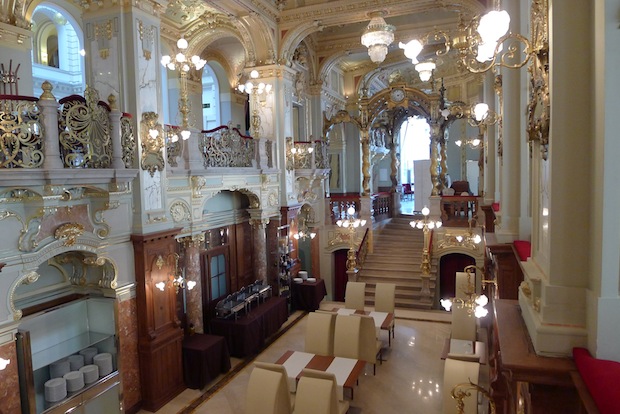 From the middle of the 30's more and more cheap pub opened, night lift has shifted toward Andrássy avenue, into the downtown area. New York stood empty. Through the siege of Budapest it was destroyed and robbed naked, later it was used for storing and selling potato to town folks. In 1947 it went through a restoration, a buffet-brasserie and a modern cafe opened as these places suited better to the intellectuality of the era. They weren't successful at all. 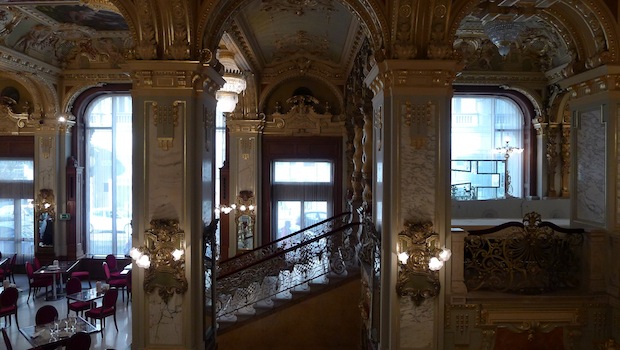 Boscolo from Italy bought the place in 2000, than in 2006 reopened New York with the original shine and finery next to their hotel. They brought back all: gilding, chandeliers of Murano glass, restored murals, marbling (sometimes with artificial materials though), the only thing they couldn't bring back is the Hungarian public. 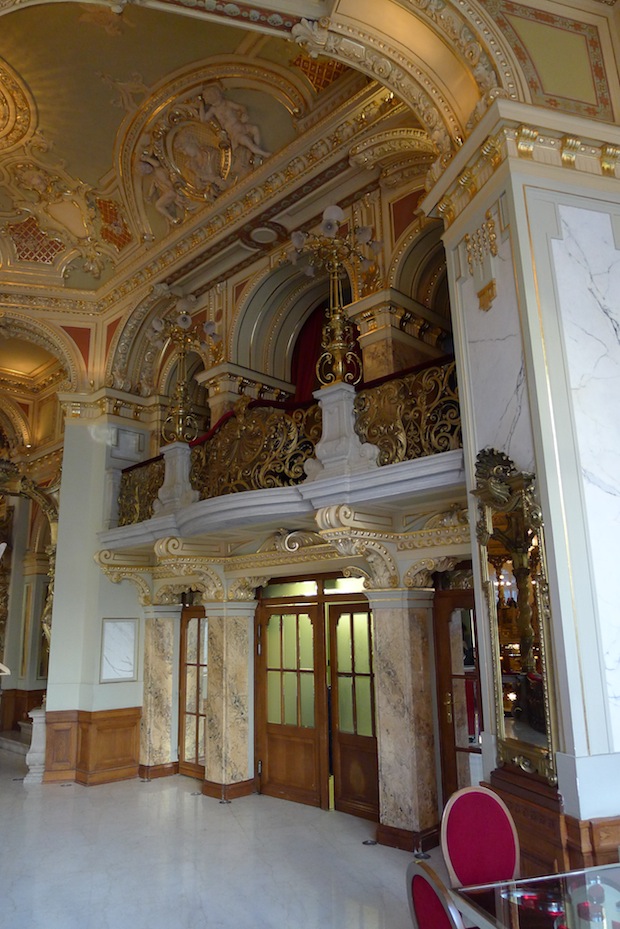 Between glass sheets you can see pictures of famous writers with a short biography and citation in English and Hungarian if you check the Dohány street side of the building.

On the menu you can find breakfast from the XX and the XXI century too for 17-19 EUR. In the former there is hominy, black pudding, ham, cottage cheese cream and pickles in the last there is cold goose liver, butter-loaf, cold beef, sardine and trout. You can get a soup from 8 EUR and a main course for 15-25 EUR.